This is the 28th match of the Pro Kabaddi League. In this match, both the teams of Puneri Paltan VS Bengaluru Bulls will face each other. The match will take place on 2 JAN at 8:30 PM at Sheraton Grand, Whitefield in Bengaluru.

Puneri Paltan VS Bengaluru Bulls Both the teams will start the match at 8:30 pm at the Sheraton Grand Stadium in Bengaluru. The team of Puneri Paltan could not do anything special in this tournament. But Puneri Paltan’s team lost their last match to Tamil Thalaivas by a margin of 10 points. Puneri Paltan has played 4 matches in this tournament and has won 1 match out of 4. And had to face defeat in the remaining 3 matches. Puneri Paltan is at the bottom of this season with 5 points. He will go to break his continuous losing streak, will play against Bengaluru in this match with all his might.
Bengaluru Bulls have given their best performance so far this season. The last match of the Bulls was with the Telugu team. The match ended in a tie, in this match, the team captain Pawan Sherawat scored the most points from Bangalore’s side, he added 8 points to the team’s account. In this tournament, the team has played 5 matches so far and won 3 matches out of 5 matches and had to face defeat in only one match. And 1 match was tied. Bulls are second in the points table this season with 18 points Bengaluru Bulls are winning consecutive matches. And to keep this winning streak going like this, she is going to play hard in this match.

Pawan Sehrawat is the captain and best raider of his team, he has played 5 matches for his team so far and has scored 66 points in 5 matches, he has the power to take every match point, he has taken points for the team. This is a safe player for your Dream11 prediction team.
Pankaj Mohite is playing as a raider in the team. He has played 4 matches this season. And has added 17 points for the team in 4 matches. He added 8 points for the team in the last match. In which he did 16 rides out of which 5 were successful and 3 were unsuccessful and 7 were empty. And also did a tackle together, which was successful. This is the best player for the Dream Prediction team.

Mahender Singh is the best defender in his team, he has played 5 matches this season and has added 11 points in 5 matches for the team. He made 6 tackles in his last match. Out of which 3 were successful. And three were unsuccessful out of which 1 was Super Tackles. This is the safe player for your dream11 team. 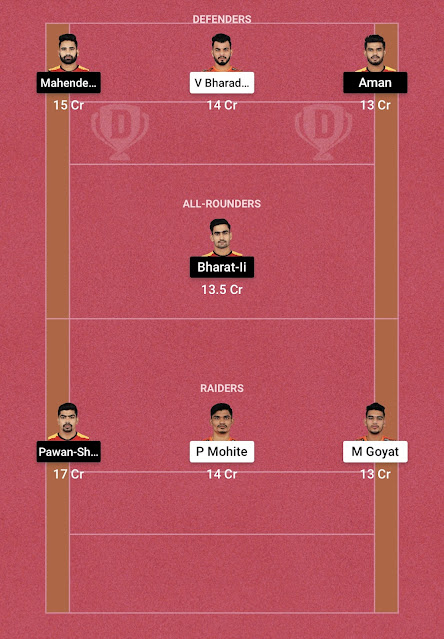 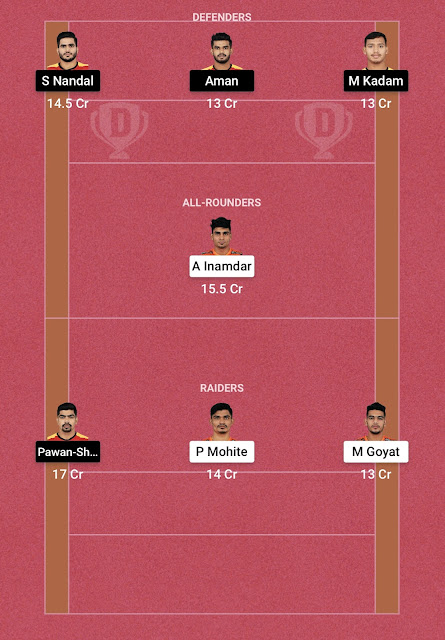