This is the 40th match of the Pro Kabaddi League. In this match, both the teams of U.P. Yoddha VS Dabang Delhi K.C. will face each other. The match will take place on 8 JAN at 7:30 PM at Sheraton Grand, Whitefield in Bengaluru.

UP. This is the 40th match of Pro Kabaddi being played between Yoddha Vs Dabang Delhi KC Dabang Delhi team won their last match, this match was against rival team Telugu, this match was won by DEL team by 1 point. Delhi team is second in the points table with 26 points. DEL has played 6 matches in this tournament and won 4 out of 6 matches, the other team UP Yoddha had to face defeat in their last match. This match of UP was with Tamil team, in this match UP team was defeated by 6 points. UP Yoddha has played 6 matches so far in this tournament and this is the 7th match, having won only 1 match out of 6. 9th in the points table with 14 points both are the best team and will give their best performance in today’s match and the match is going to be exciting.

Match: UP VS DEL (U.P. Yoddha VS Dabang Delhi K.C)

UP VS DEL Live Score

DEL VS UP Top Raider

Naveen Kumar is a good raider of the DEL team, he has added 108 points in 6 matches so far this season. He has taken maximum points in raids. This is the best player for your UP VS DEL Dream11 prediction.
Pradeep Narwal, the best raider of UP, in this season he has played 6 matches for UP Yoddha so far and has added 44 points in them, his raid strike rate is 48%, this is the safest player to take your dream11 of today’s match.

UP VS DEL Top All-Rounder

UP VS DEL Top Defender

UP VS DEL Prediction Playing 7

UP VS DEL Squads 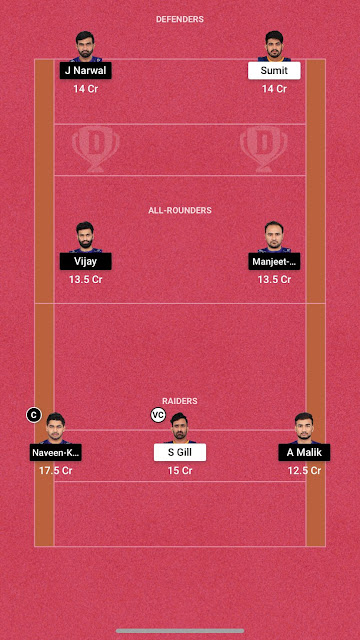 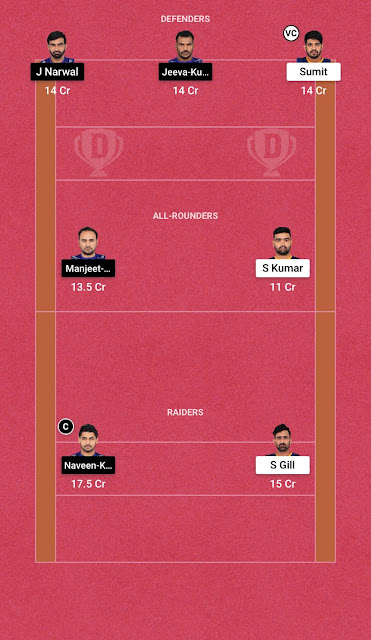