The KFC Big Bash League match will be played between Melbourne Renegades and Brisbane Heat. We will give you complete information. REN VS HEA Dream11 Prediction will help in team building. We will also help you with REN VS HEA Fantasy Team. It is our responsibility to provide Fantasy Cricket Tips and Updates of HEA vs REN Playing XI Team, REN VS HEA Today Match Prediction, Pitch Report More Updates, as well as REN VS HEA Live Scores.

This is the 37th match of the KFC Big Bash T20 Leauge 2021-22. In this match, both the teams of Melbourne Renegades VS Brisbane Heat will face each other. The match will take place on January 6 at 12:30 PM at Simonds Stadium Geelong, Australia.

The 37th match of the Big Bash League will be played between Brisbane Heat and Melbourne Renegades. Both the teams have not had a great journey so far, both teams have not been able to make their place in the top 4 Brisbane Heat is in fifth place and Renegades is in seventh place. Brisbane Heat played their last match against the Hobart Hurricanes, which they won by 14 runs. In that match, Hurricane won the toss and decided to bowl first but Brisbane Heat proved their decision wrong and set a target of 151 runs on the scoreboard. For Brisbane, James Bailey played a brilliant inning of 44 runs in which he hit 3 fours and 2 sixes. The team of Hurricanes, who came to play the second innings, could only score 136 runs. Successful bowler Xavier Bartlett took 4 wickets for Brisbane Heat.

The Renegades had their last match against the Stars in which they won. Stars won the toss and decided to bat first but the Renegades bowler proved the decision wrong and he was dismissed for a personal score of 126. The most successful bowler from Renegades was Kane Richardson who took 3 wickets in 4 overs. Reynad’s team, who came to bat later, easily achieved this target, Aaron Finch scored a half-century from his side, in which he hit 3 fours and 2 sixes.

Below is the Dream11 prediction team for Melbourne Renegades and Brisbane Heat.

If you want to watch the live score of KFC Big Bash T20 League 2021-22 matches. then you can click here to see the live score. You can easily watch on CricBuzz and Fancode.

The pitch of the match to be held on this will be dry, due to which it will help the spin bowlers more, due to which the batsmen may face some problems. Avg Score 155

Light rain will remain in the sky at Simonds Stadium Geelong, Australia the temperature will be around 23.39 degrees.

AARON FINCH – Aaron Finch is a very dangerous batsman, the best good bowlers of the world fear him, although he has not performed well in this league, he scored a half-century in his last match, indicating his return.

CHRIS LYNN – Chris Lynn’s name comes to the mind of explosive batsmen of the world, how dangerous he can prove to be, no one needs to be told that he has scored 458 runs in 13 matches played so far, so taking him in your dream11 team prediction is a very good option. Maybe

NIC MADDINSON – Nich Maddinson is the captain of the Renegades. He has helped his team with both bat and bowl. His form has also been excellent. He is expected to help his team win more matches.

JAMES BAZLEY – James Bazley has helped the team win a lot of time with his all-rounder performance.

XAVIER BARTLETT – Bartlett’s bowling is a matter of concern for the rest of the team this season; The flamboyant bowling has left many good bowlers sweating it would be nice to include them in your Dream11 team predictions.

PETER HATZOGLOU – Peter’s bowling is a very good thing for Renegades, he has shown a lot of performance this season, hope he continues to perform the same. 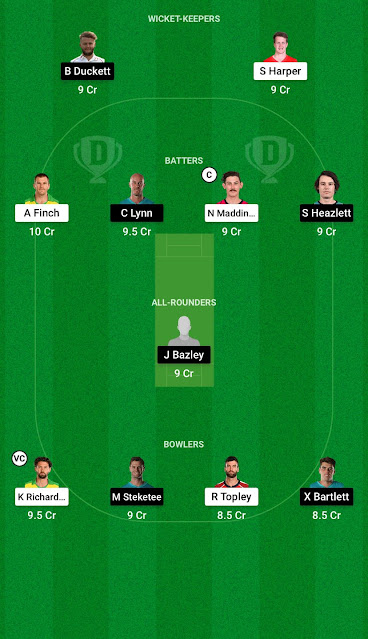 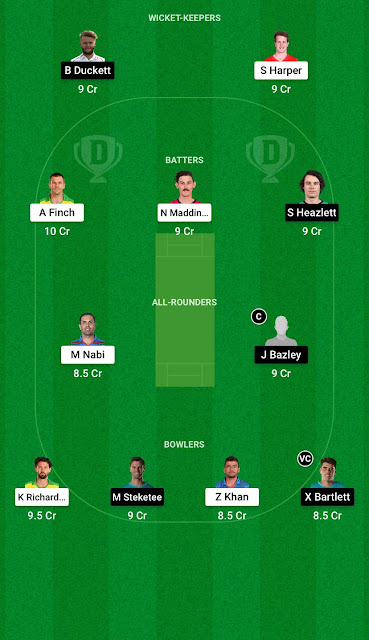