This is the 47th match of the Pro Kabaddi League. In this match, both the teams of Patna Pirates VS U Mumba will face each other. The match will take place on 11 JAN at 7:30 PM at Sheraton Grand, Whitefield in Bengaluru.

Patna Pirates and U Mumba is going to be a great match. Patna Pirates played their last match with Gujarat, in which Patna Pirates easily defeated Gujarat team. In this match, 27 Patna Pirates and Gujarat team could have 26 points. More points were taken by Prashant Kumar who is also the captain of Patna Pirates Patna Pirates has played 7 matches so far in Vivo Pro Kabaddi League. In these matches, only 5 matches have been won. Patna Pirates is second in the points table with 29 points, the second team U Mumba played its match with Telugu Titans team, in this match U Mumba defeated Telugu Titans by 10 points. Was defeated by a margin in this match, Abhishek Singh from the team of U Mumba, who is a good raider in the team, had put 13 points in his account, he did a total of 19 raids in which his 11 raids were successful and was U Mumba Pro Top 5 in Kabaddi League, he has played 7 matches so far in this season and has won only 3 matches in 7 matches.

Match: PAT VS MUM ( Patna Pirates VS U Mumba)

U Mumba team’s best raider Abhishek Singh has proved to be the best raider in U Mumba, he has been playing continuously for u Mumba team for many years, in this season he has played seven matches for U Mumba team and 57 points in 7 matches Have taken his raid strike rate is 47 percent, he played 43 matches so far in Vivo Pro Kabaddi League and in these 43 matches he has taken 273 points in which he has done 571 raids and his 40 percent has been successful, he is a very good raider is for your dream11 team.
Monu Goyat, who used to play for the Haryana team before this, is playing this season or for the Patna team, he is a very good raider, he has played seven matches for the Patna team so far, has taken 55 points in seven matches. His raid strike rate is 35 percent and fifty-fifty percent tackle strike rate. He has played 80 matches so far in Kabaddi league and has taken 554 points in 80 matches, 75 percent remains not out, so far he has total raid of 1075 out of which 40 percent remains successful dream11 is the best player for the team and safe player for today’s match.

Mohamedreza Chiyaneh who is a good allrounder of the team is playing in Vivo Pro Kabaddi League for the first time. He has taken 21 points in 7 matches and has a tackle strike rate of 54%. He has played 7 matches so far and has taken 21 points in these matches. He has a total of the raid 6 and in the defensive, he has many support tackles 2. His tackle point is 21. This is the safest player for the Dream11 prediction team.
Mohsen Maghsoudlou who is playing as an all-rounder in the team has scored 15 points in six matches this season for the U Mumba team, his raid strike rate is 26% and tanker strike rate is 50%. He has played 54 matches so far for Vivo Pro Kabaddi and has scored 127 points in those 54 matches, he has also been 250 in Pro Kabaddi League so far and his 25 percent raid out of 250 rates has been successful. The total tackle in the league so far is 95 out of which super tackle is 5, this is your prediction team. is the safest allrounder for 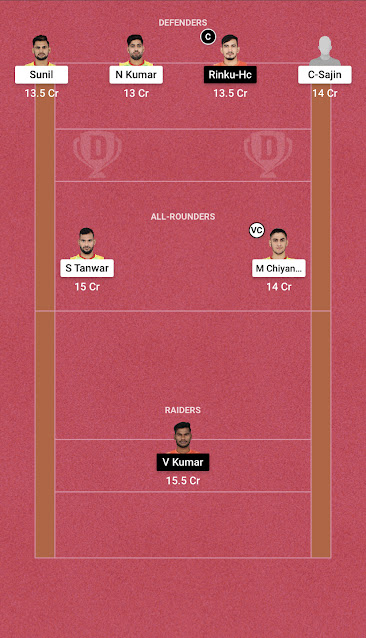 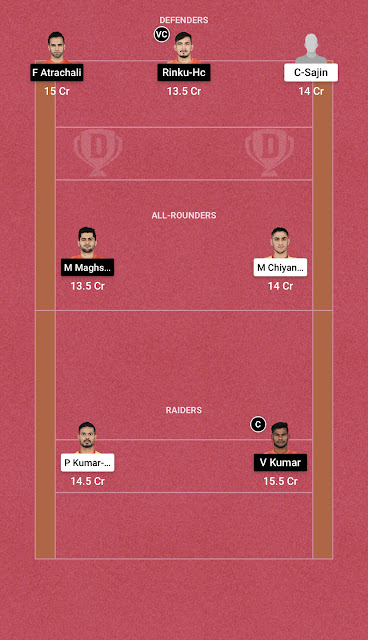