This is the 46th match of the Pro Kabaddi League. In this match, both the teams of Jaipur Pink Panthers VS Dabang Delhi K.C. will face each other. The match will take place on 10 JAN at 8:30 PM at Sheraton Grand, Whitefield in Bengaluru.

Naveen Kumar is the best player raider of Dabang Delhi, he has broken all the records this time. He is a super fast raider, he has taken 126 points in 7 matches so far. He has the highest raid strike rate of 69% and a tackle strike rate of 75%. He has played 52 matches in the entire Pro Kabaddi League so far and has taken 606 points in 52 matches. It remains 84% ​​not out. He has done 958 total raids so far, out of which 53% have been successful. He has taken 596 points in these raids. He is the most selected captain in Dream11.
Arjun Deshwal is the best raider of the Jaipur Pink Panthers team. He has added 93 points in 7 matches, his raid strike rate is 66%. Their tackle strike rate is 50%. He has played 29 matches in Pro Kabaddi League in which he took 203 points. Their overall 78% are not out. They have raided 342. And in those raids, he added 200 points. This is your dream11 team prediction, safe player

Vijay, who is a good allrounder of the team, used to play for Patna team earlier. He has been playing for Dabang Delhi since last season and has been performing tremendously this season, adding 35 points for the team in 7 matches. They have a 53% raid strike rate, and a 33% tackle strike rate. He has played 69 matches in the Pro Kabaddi League so far. And in these matches, he has taken 234 points. His ride % is 36 and tackle % is 34. This is the safest player for your Dream11 prediction team
Deepak Hooda is a good allrounder of the Jaipur team, he has added 40 points in 7 matches, his raid strike rate is 41%. He has played 130 matches and in those matches, he has taken 983 points. He has a very good record in raiding and defensive, you can have him as an allrounder in your dream 11 teams.

Joginder Narwal is the captain of the team and a good defender. He has played 7 matches for the team this season and has so far taken 11 points in those 7 matches. They have a tackle strike rate of 39%. He has played 89 matches in the Pro Kabaddi League so far and has taken 188 points in these matches. It is not out. They have done 6 raids so far and 50% of them have been successful. Their tackle rate is 44%. He is the best and safest player on your prediction team 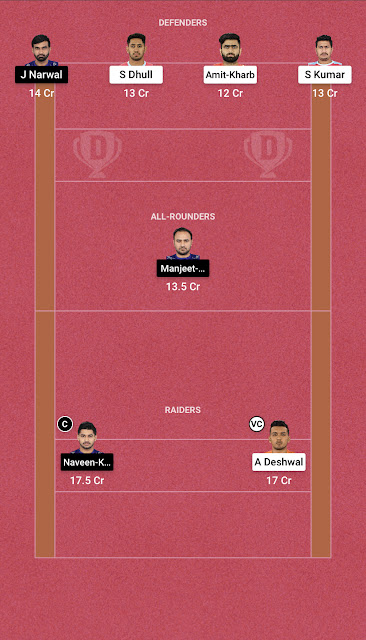 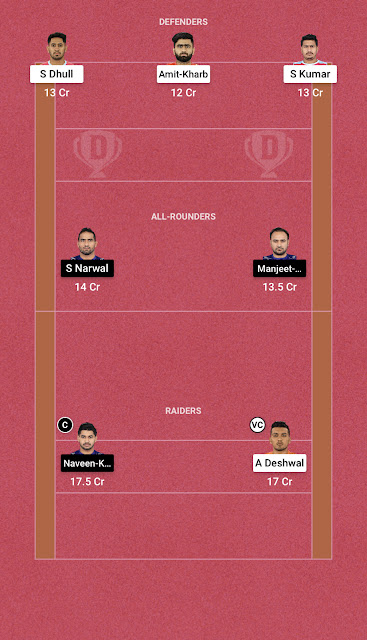