This is the 50th match of the Pro Kabaddi League. In this match, both the teams of Dabang Delhi K.C. VS Bengaluru Bulls will face each other. The match will take place on 12 JAN at 8:30 PM at Sheraton Grand, Whitefield in Bengaluru.

Both Dabang Delhi and Bengaluru Bulls teams will compete on January 12 at 8:30 pm in the stadium of Bengaluru, both the teams had to face defeat in the last match. The last match of the DEL team was with the Jaipur team. In which Jaipur Pink Panthers defeated Delhi by 2 points, Deepak Hooda took the most points in this match. The second team Bengaluru Bulls played the last match against UP Yoddha, in which UP Yoddha defeated Bengaluru Bulls very badly. In this match, the UP Yoddha team took 42 points, the other team Bangalore Bulls could take only 27 points.
The Bangalore team had to face defeat by a difference of 15 points, in this match, Pawan Sehrawat took the most points from Bangalore’s side. If we talk about the standings, then in this entire Vivo Pro Kabaddi League both the teams are not performing very well Dabang Delhi who have played 8 matches in this match and won five matches in 8 matches and are second in the points table. The second team Bengaluru Bulls who have played eight matches so far in Vivo Pro Kabaddi League and won five matches out of 8 matches and are third in the points table of Vivo Pro Kabaddi League, both the teams are going to see a tremendous fight.

Manjeet Chhillar is playing as Allrounder in the team is the most selected Allrounder in Dream11. He has played 8 matches so far in this Vivo Pro Kabaddi League Season 8, he has taken 16 points. Their tackle strike rate is 38%. He has played 166 matches so far in Vivo Pro Kabaddi. Have taken 579 points. Their tackle success rate is 50%. This is the best all-rounder for the dream11 team.

Saurabh Nandal is playing for the Bangalore Bulls team this time, he has played eight matches so far in this season 8 in which he has taken 19 points, his tackle strike rate is 50%, he has played 31 matches so far in Vivo Pro Kabaddi and in these matches I have taken 76 points, their tackle average so far is 46% which is pretty good. This is a good defender for your Dream11 prediction team.

Jeeva Kumar is playing as a defender in Dream is the most picked. He has taken 10 points in 8 matches this season. Their tackle strike rate is 26%. He has played 123 matches so far. Having taken 245 points out of these, this is a very safe player for your prediction team. 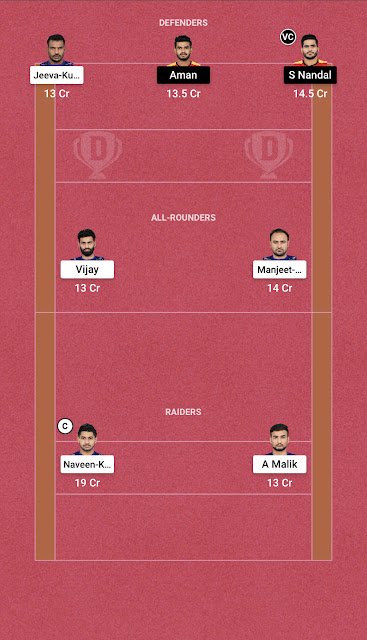 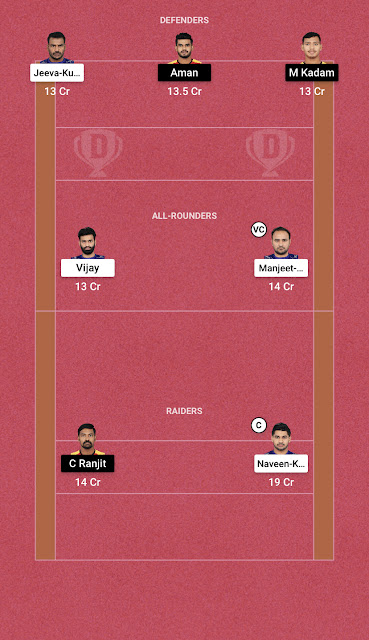