The KFC Big Bash League match will be played between Adelaide Strikers and Hobart Hurricanes. We will give you complete information. STA vs SCO Dream11 Prediction will help in team building. We will also help you with STA vs SCO Fantasy Team. It is our responsibility to provide Fantasy Cricket Tips and Updates of SCO vs STA Playing XI Team, STA vs SCO Today Match Prediction, Pitch Report More Updates, as well as STA vs SCO Live Scores.

This is the 35th match of the KFC Big Bash T20 Leauge 2021-22. In this match, both the teams of Adelaide Strikers VS Hobart Hurricanes will face each other. The match will take place on January 5 at 12:30 PM at Adelaide Oval.

Adelaide played their last match against Sydney Thunder in which they lost. Thunder won the toss in that match and decided to bat first and put a huge score in front of the strikers, they set a target of 173 runs to the strikers. Wes Agar took 3 wickets for Strikers. The striker’s team, who came to play the second innings, could not handle the pressure and got out on a total score of 144 runs. The successful batsman from the striker’s side was Harry Nielsen, who played a responsible inning of 39 runs, in this innings, he hit 4 fours and 1 six. Adelaide Strikers are at the bottom of the points table with 1 win and 7 losses in 8 matches

Hobart Hurricanes lost their last match in which they had to face defeat, Hurricanes won the toss and decided to field first but Brisbane team proved their decisions wrong and set a target of 151 on the scoreboard. Nathan Ellis bowled well for Hurricanes, he took 3 wickets for 41 runs in his 4 overs spell. The team of Hurricane, who went to play the second innings, lost early wickets in the opening over itself. The team did not get time to handle itself and the wickets kept falling and the required run rate increased, thanks to the sharp innings of Tom Rogers, the team could reach the score of 136 runs. He hit 4 fours and 2 sixes in his innings in front of 20 balls. The Hobart Hurricanes occupy the 4th position in the table with 4 wins and 4 losses.

Light grass and light dryness can be seen on the pitch of this ground, which means it will help both spin and pacer bowlers. But the batsmen will also not have to face many problems. The average score of the team batting first on it is 160 to 170.

It may be a good option to bat first after winning the toss but the team that batted first has won 70% of the matches.

Light clouds will remain on the sky at Adelaide Oval Cricket Ground, the temperature will be around 17 degrees.

D’ARCY SHORT – D’Arcy Short’s performance in this league has been amazing, he scored 233 runs in 8 matches, in which his best score was an innings of 73 runs.

MATT RENSHAW – Matt’s performance in this league has not been as great as he is a batsman, hope he comes into his form early and contributes to his victory.

MATT SHORT–  Matt Short has got less chance so far in this league the team management should blossom for him, maybe he can help the team to win

TIM DAVID – Team David’s performance this time has been amazing, in the matches played so far, he is surprising everyone with his all-rounder performance.

TOM ROGERS – Tom Rogers’s performance this time is very strong, his circumcised balls have knocked knees from good batsmen, he has taken 14 wickets at an average of 13.2 in 7 matches played.

RASHID KHAN – Rashid Khan does not need any introduction, he has proved his bowling to the whole world, he has got a good bowler in the spin of his bowling, he has taken 11 wickets in 8 matches played. 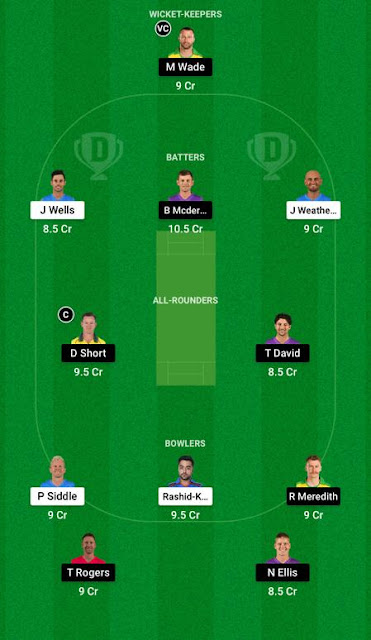 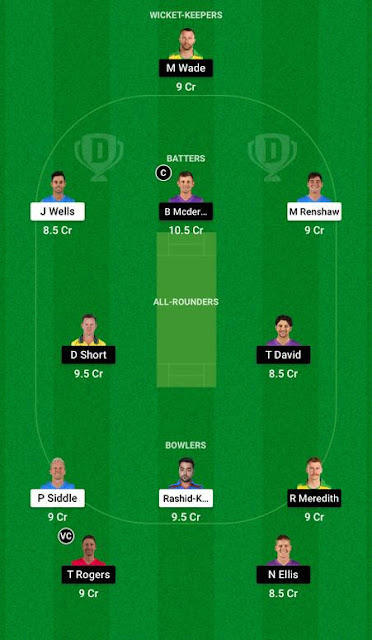