This is the 34th match of the KFC Big Bash T20 Leauge 2021-22. In this match, both the teams of Brisbane Heat vs Sydney Sixers will face each other. The match will take place on January 5 at 1:45 PM at Metricon Stadium Carrara, Australia

The 34th match of the Big Bash League will be played between Brisbane Heat and Sydney Sixers at the Metric Stadium on January 4. Brisbane Heat played their last match against Hobart Hurricanes, in which they win by 14 runs, in that match, Hurricanes won the toss and decided to bowl first and invited Brisbane Heat to bat first. Brisbane, batting first, set a big target of 150 runs in front of the Hurricanes. For Brisbane, James Bazley called the highest unbeaten innings of 44 runs, in which he hit 3 fours and 2 sixes. The team of Hurricanes, who came to play the second innings, could score only 136 runs for the loss of 8 wickets after playing 20 overs, Xavier Bartlett took 4 wickets while bowling economically for Brisbane. Brisbane occupies the 5th position in the points table.
And the same Sydney Sixer’s last match was to be with Melbourne Renegades but that match had to be canceled due to Covid-19 and both the teams were given one point each. Sydney occupies the 2nd spot in the sixers points table.

The pitch of this ground can see some grass, due to which it will be of extra help to the fast bowlers and this can cause some trouble for the batsmen, but the average score of the team batting first is 155 to 160.

CHRIS LYNN – Australian batsman Chris Lean plays for Brisbane Heat in this league. There is no need to give proof to anyone because of how dangerous he is, he alone can turn the dice of the whole match on his own.
JOSH PHILIPPE – This tournament has been great for Jose, he has scored 295 runs in 8 matches played, his performance gives a boost to the team.

MOISES HENRIQUES – Moises Henriques has placed his team Sydney Sixer in the top teams this year, his captaincy, his batting, his bowling, he is truly an all-rounder, hope he takes his team to the final and also wins
JAMES BAZLEY – James Bazley’s performance has come out well, he has performed well in the last few matches he has played, he played an important inning of 44 runs in his last match. 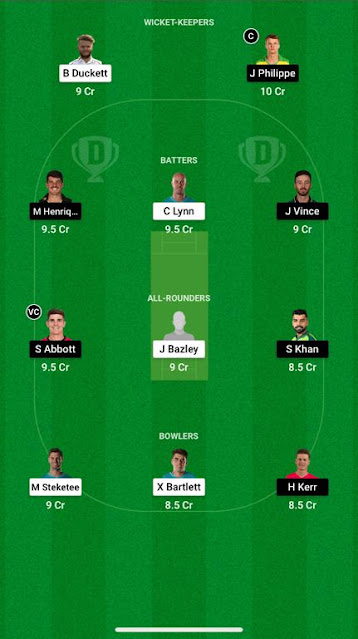 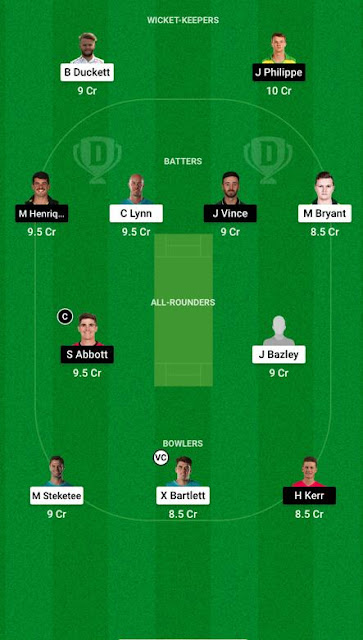