This is the 27th match of the Pro Kabaddi League. In this match, both the teams of Dabang Delhi K.C VS Tamil Thalaivas. will face each other. The match will take place on 1 JAN at 9:30 PM at Sheraton Grand, Whitefield in Bengaluru.

Dabang Delhi KC VS Tamil Thalaivas In this match both the teams are going to face each other. Tamil Thalaivas have played 4 matches so far in this tournament and won 1 match out of 4 and lost 1 match. And two matches did not yield any result. In the last match, the team won by 10 points. Ajinkya Pawar had added 11 points for the team. While another player Manjeet added 8 points.
Dabang Delhi KC Hasn’t lost a single match in this tournament so far, Dabang Delhi has played 4 matches and won three matches and the team’s last match was with Bengal Warriors. The match in which Delhi defeated Bengal by a margin of 17 points. In this match, team raider Naveen Kumar added 24 points for the team. He did amazing in this match.

Naveen Kumar is a good raider, he took 24 points in his last match. In which he did 25 raids and was successful in 20 raids. And did not fail in one of the raids. And 4 raids were empty. This is the safest player for your dream11 prediction.
Vijay Malik is playing in his team as Allrounder, he had 10 raids in the last match in which he had 5 successful raids and 2 failed. And 3 raids were empty. He did a tackle in which he failed. This is the best player for your dream11 team as an allrounder.
Manjeet is the raider in the team. He added 8 points in the last match for the team. In which he did 17 raids and out of 17 raids 5 were successful and 3 failed and 8 were empty this is a safe player for your prediction team

Sandeep Narwal is a good player, he did 5 tackles for the team in the last match, in which he got only one tackle. And 4 tackles were unsuccessful. Joginder Narwal, who is also the captain of the team, made a total of 4 tackles for the team in his last match, in which only 1 tackle was successful. and 3 tackles failed it’s a safe player for your prediction team.

Ajinkya Pawar This is a good raider He had 11 points in the last match in which he took 11 raids out of 11 raids 7 were successful and 1 failed and 3 were empty.
Surjit Singh who is playing as a defender in the team is also the captain of the team, he had 4 tackles. Out of which, 3 tackles were successful. 1 tackle had failed. 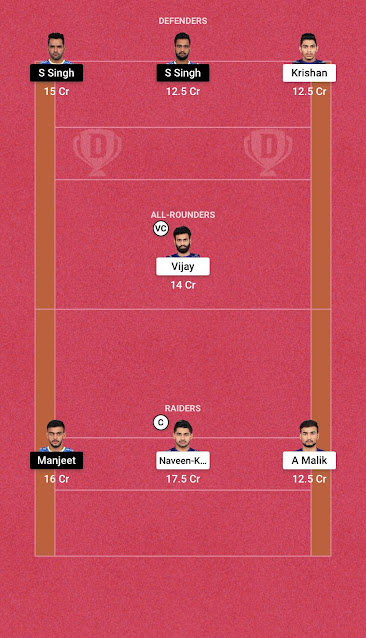 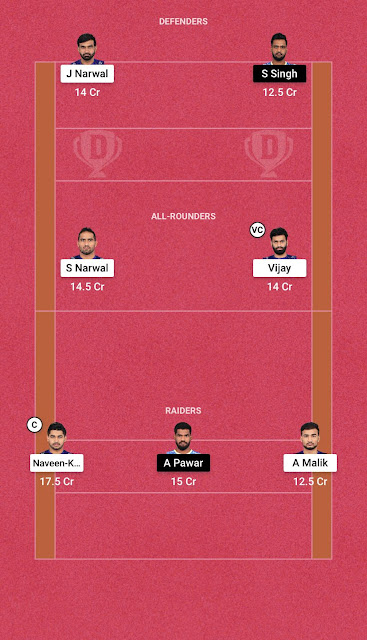