The 28th match of the Big Bash League is to be played between Sydney Thunder VS Adelaide Strikers. Sydney Thunder played his last match, Perth Scorchers, in which he scored 200 runs while batting first and gave a target of 201 runs to the front team. But Perth Scorchers could only manage 166 runs and Sydney Thunders won the match with 34 runs remaining.

And the same Adelaide Strikers played their last match with Hobart Hurricanes, in which they had to face defeat. Strikers won the toss and decided to bat first and gave a selective target of 176 runs to the opposing team but it was the strikers’ misfortune that they could not save the target.

The 28th match between Sydney Thunder and Adelaide Strikers will be played at the Adelaide Oval on 31st December at 1:45 pm.

The Adelaide Oval pitch is a bit slow in the opening over and the fast bowlers get a swing. The average score of the team batting first on this is around 182 to 190. This pitch is the home pitch of the Adelaide Strikers, which will benefit them at home. It is beneficial for the team playing the second innings because of the Due.

The winning average of the team batting first on this pitch is very low, so after winning the toss, the team should bowl first.

TANVEER SANGHA – Tanveer Sangh has proved to be the most successful bowler for Sydney Thunder, taking 8 wickets at an average of 18.50 in the 6 matches he has played.

MATT SHORT – Matt Short has been the most successful batsman for the Adelaide Strikers, scoring 156 runs in 6 matches, in which his best performance was an innings of 63 runs.

RASHID KHAN – He has proved to be the most successful bowler for the Adelaide Strikers, taking 10 wickets at an average of 17 in 6 matches.

ALEX ROSS – Alex Ross has been performing very well for Sydney Thunder, scoring 181 runs in 6 matches he has played in this league. 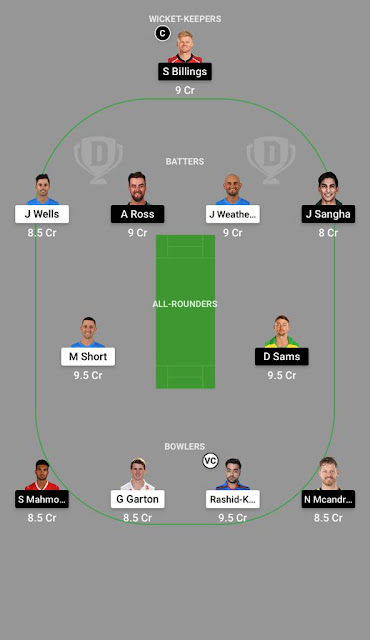 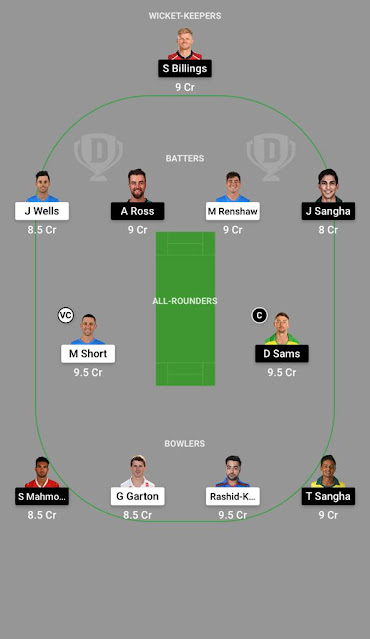