India is going to play 4th match in Asia Cup U-19, India is going to play its fourth match against Bangladesh. They finished second in the group with 2 wins and 1 loss in their last three matches.
India played their last match against Afghanistan in which they won with 4 wickets remaining. India won the toss in their last match and decided to bowl first and restricted the opposition team to 259. India had achieved this target very easily, Indian batsman Harnor played the most innings of 65 runs. And played an important role in achieving the target easily. Bangladesh’s previous match was with Sri Lanka which could not happen due to the Covid-19 pandemic Hope player’s is in good health in this tournament
India’s fourth match will be played with Bangladesh on 30th December at 9:30 AM at Sharjah Cricket Stadium, Sharjah

The Sharjah ground has proved to be beneficial for both the batsman and the bowler. The matches played so far in Sharjah have proved to be very helpful for the batsmen, due to which the teams have scored high scores.
Here the bowlers have also dominated, if the batsman misses even a little, then the bowler will not miss by taking wickets. If you score high here: then other teams are all out too: many times. This pitch has an average score of 250+.

Harnoor Singh – Harnoor Singh’s form has been a great thing for India The audience gets a lot of entertainment seeing his amazing batting. Asia Cup is proving very good for him, he scored 231 runs in 4 matches played: In Asia Cup
Raj Bawa Indian left-arm fast-medium bowler has done well in Asia Cup. He took 4 wickets for 56 runs in the match against Pakistan.
Rakibul Husan Bangladesh captain Rakibul Hossain’s performance in the Asia Cup has been good, he played 2 matches: in which he has taken 4 wickets.
Mahifijul Islam Bangladeshi team’s opener bowler Mahifzul Islam started the Asia Cup with his century. However, he was dismissed after scoring just 17 runs in the second match. hope he will do well against India
Ripon Mandal Bangladesh medium bowler took 3 wickets while bowling well against Kuwait. However, even after performing so well, he had to sit out of the team, hoping he played against India.
Rajvardhan Hangargerkar   Rajvardhan is the Indian all-rounder who performed well in the Asia Cup he make 81 runs and took  5 wickets in 3 matches played

For today’s match, those players were selected from best player dream11 prediction, who have so far good runs and bowling and good fielding and wicketkeeper who has the highest number of points in dream11, only you have to choose player according to dream11. is being given. We can make the best team, we are giving you tips and daily updates.   👉  Live Score 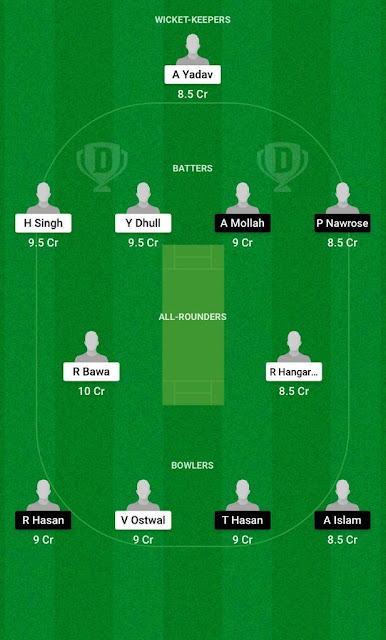