In the 13th match of Pro Kabaddi League 2021, the match between Gujarat Giants vs Dabang Delhi will be played at Sheraton Grand Whitefield Hotel in Bengaluru on 26th December. GUJ played their last match against BW in which GUJ lost by 3 points. Earlier, the match of Gujarat was with the JPP team. The match in which Gujarat beat JPP by 7 points.
The second team DEL played their last match against the PP team in which DEL beat the PP team by 11 points. And it happened in the first match of DEL to UM. In which DEL beat UM team by 4 points.
GUJ team has played 2 matches so far out of which one match has been won and the other match has been lost, with this GUJ team is at 4th position in the points table with 6 points.
The other team DEL has played 2 matches so far. And having won both the matches is at number one in the points table.

Rakesh Narwal is one of the most experienced players on the Gujarat team. Rakesh Narwal has done 32 raids so far this season, out of which 16 raids have been successful. And a super raid has also surfaced. He made 32 raids in 2 matches, out of which 16 raids were successful. There are 16 points in 16 raids. This is one of the best players for the Dream11 Prediction Team.
Ravinder Pahal is the youngest player of Gujarat Three. He has played 2 matches for his team. And out of 8 tackles in 2 matches, 4 tackles were successful. In which he got 4 marks. It’s best for the Dream11 team is a safe player.
Looking at the record of 2 matches of Pro Kabaddi League 2021 so far, Naveen Kumar has been successful in 28 raids in 52 raids and has also made 2 tackles. And also 2 super raids came out for his team, he has scored 17 points in 2 matches. He is the most selected player in Dream11 predictions for DEL.
Joginder Narwal has made 16 total tackles in 2 matches for his team DEL so far. Out of which successful tackles are 8. Joginder Narwal scored 6 points in 2 matches. This is a safe play for the Dream11 team, you can choose him in your prediction team. Their tackles are 50% successful i.e. one tackle out of 2 tackles is successful. 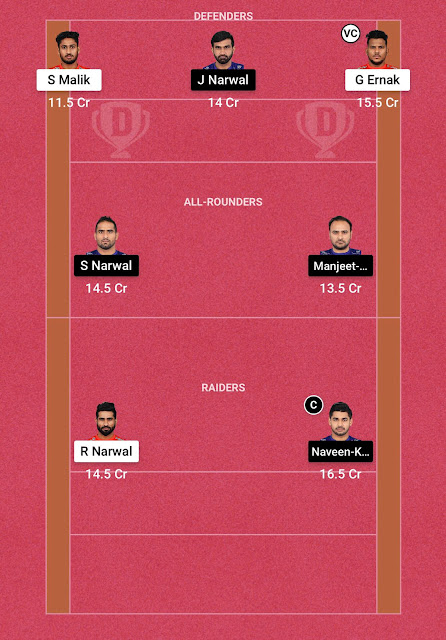 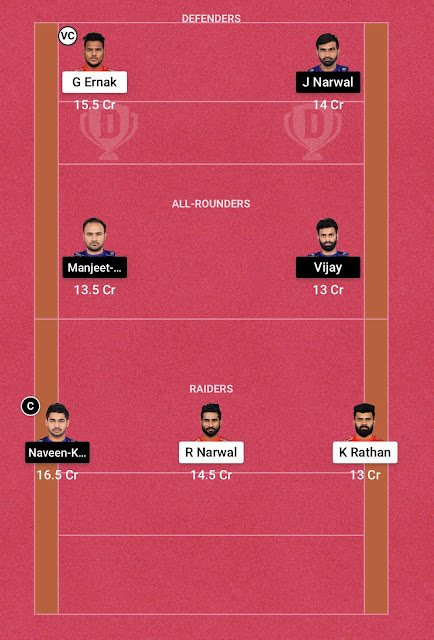