GGI VS KHW will face Oman D20 League 2021-22 on 28 December. Both the teams have won their last match. Ghubrah Giants played his last match against the Azaiba XI team which defeated the Opponent by 8 wickets. The Opponent team, batting first, scored 181 runs in 20 overs, chasing the score, the team won the match by losing 2 wickets in 17.4 overs.

The second team Khuwair Warriors played their last match with the KHW team, in which they won the match, the team has won 2 matches out of 4 matches and is fourth in the points table with 4 points.

Winning the toss and bowling on this pitch means you have won 50% of the matches because the record for the last few matches is that the team that has bowled first has won 70% of the matches.

Ghazanfar Iqbal has scored 75 runs in 3 matches so far in this tournament, scored 41 runs in 19 balls in the first match and 28 runs in the second match, and got out after scoring 6 runs in the third match.

Amir Kaleem has played 4 matches in this tournament so far he is an all-rounder he has scored 101 runs with the bat in 4 matches and has taken 4 wickets with the ball and can take runs and wickets in every match this dream11 prediction for the team Is the safest player.

Zeeshan Siddiqui is the best player on the Khuwair Warriors team, he has scored 156 runs in 4 matches, he is scoring runs in every match.

Muzahir Raja has taken 11 wickets in 4 matches this season. Has taken 3 wickets in three consecutive matches and took 2 wickets in the last match.

Aaqib Javed has played his first match and in this match, he took 2 wickets for 14 runs. he will definitely play in this match. 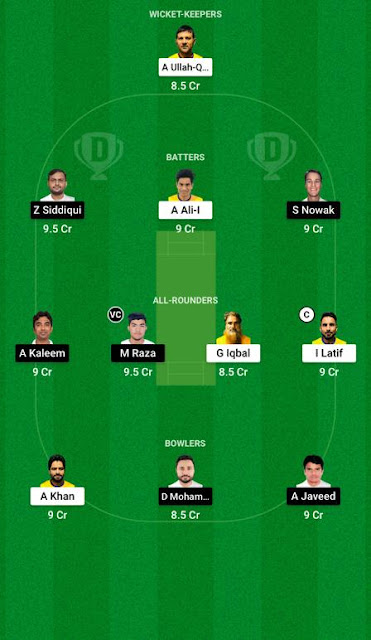 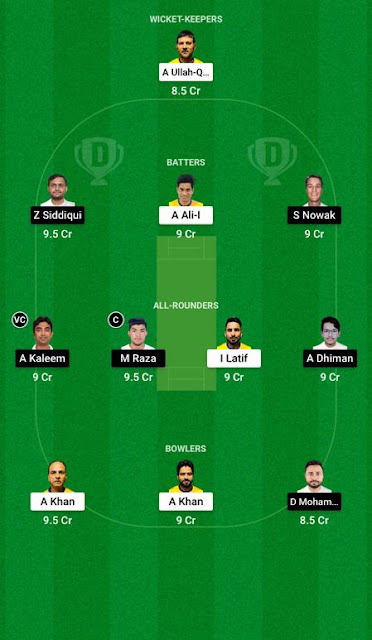