AZA vs BOB will face in Oman D20 League 2021-22 on 28th December. Both the teams had to face defeat in their last match, in this match both the teams will give their lives to win, this match is going to be exciting.

The Bowsher Busters team had lost their last match by 4 wickets, this match was with the Emirates Royals, in which the Busters, batting first, scored 164 runs in 20 overs, chasing the score, the Opponent team made this score in 19.2 overs. Twinkal bhandari scored the most runs in the Opponent team, who is also the captain of the team.

Another team Azaiba XI also lost their last match by 8 wickets. Batting first, scored 181 runs in 20 overs at the loss of 4 wickets. Chasing the score, the opponent team achieved this score in 17.4 overs. Imran and Abid Ali scored 83 runs and 53 runs for the opposite team.

On this pitch, winning the toss and bowling first is a good option as the record of the last few matches is that 3 out of 5 matches have been won by the team that bowled first.

Abdul Rauf is one such batsman who has been scoring runs consistently in the last few matches. He scored 78 runs in 54 balls in the recent last match which included 10 fours and 2 sixes.

Adnan Sulehri scored 40 runs in 20 balls in his last match. He also hit 5 fours and 2 sixes.

The team’s wicketkeeper Akmal Shahzad has scored 95 runs in 3 matches, he is scoring runs in every match. It is player safe for dream11 prediction.

Arsalan Bashir has scored 111 runs in the last 3 matches. 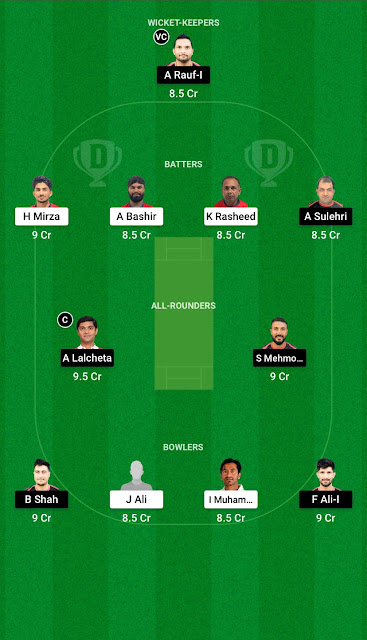 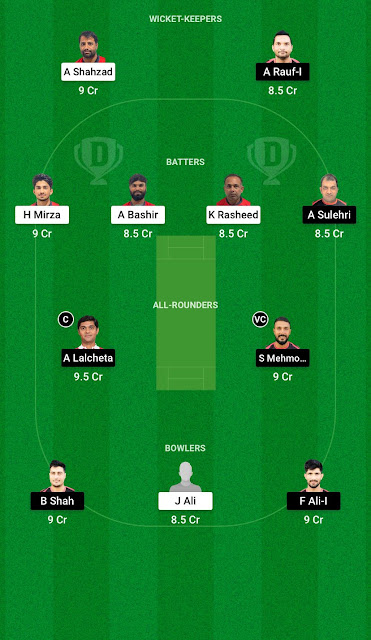