The second team Emirates Royals won their last match by 4 wickets. In this match, the Opponent team, batting first, scored 164 runs in 20 overs, chasing the score, Emirates Royals scored 166 runs in 19.2 overs. AMR team has won 2 matches in 4 matches and lost 2 matches. Ranked 5th in the points table with 4 points.

On this pitch, winning the toss and bowling first is the best option for the team because the team that bowls first on this pitch has won 80% of the matches.

Mohammed Asghar Safi Shaikh scored 24 runs in 27 balls in the last match which included 2 fours and 1 six. Second bowler Arsalan Bashir scored 64 runs in 47 balls which included 1 six and 4 fours.
Imran Muhammed has played 5 matches in this tournament so far and has taken 7 wickets in 5 matches, he takes wickets in every match.
Rao Waqar Ahmed took 1 wicket in his last match and also scored 16 runs together. He has taken 3 wickets in this season so far.
Twinkle Bhandari, who is the captain of the team, scored 34 runs in the last match, which included 4 fours and 1 six. He has scored 70 runs in 4 matches so far.
Prateek Athavale has played 4 matches so far in this season and has scored 116 runs in 4 matches and is the safest player for your dream11 team.
Mehran Khan took 3 wickets in his last match and scored 14 runs together and so far he has scored 8 wickets and 43 runs in 5 matches. 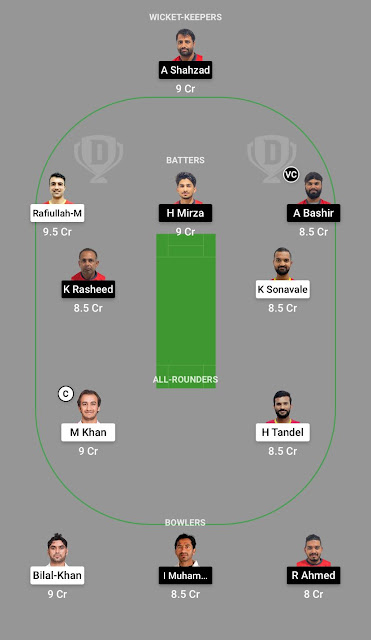 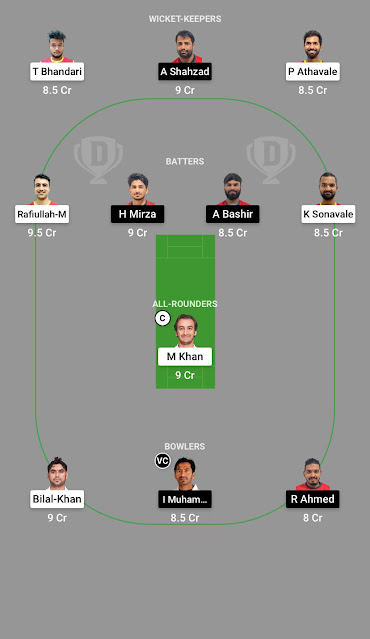